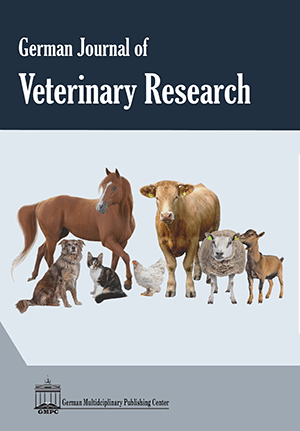 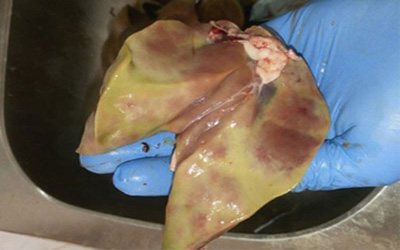 Histomoniasis is a parasitic disease of poultry with worldwide prevalence, having significant negative impacts on infected turkey health and welfare. A total of 53,000 male fattening turkeys (British United Turkeys, BUT6) of 140-day-old were admitted to the slaughterhouse in central Ukraine. No clinical signs were reported in the turkeys during the production cycle. Slaughtering of the turkeys revealed enlargement of the livers, most of which had a greenish color with alterations in the hepatic tissues (fibrosis). No other gross lesions were noted in other organs of the slaughtered birds. Fresh liver tissues were submitted to the laboratory to measure the concentrations of lead, cadmium, copper, and zinc to detect possible intoxication and/or differential diagnosis. The concentrations of measured heavy metals in the affected liver tissues were within the recommended normal ranges. Histological examination revealed microscopically proliferative changes in liver sections in different turkeys. Suspected tissue sections were stained with Periodic Acid Schiff and found positive for Histomonas meleagridis trophozoites. Overall, macroscopical or microscopical examinations of turkey livers are essential to confirm infection with histomonads, even if the clinical signs are unapparent. As outbreaks of histomoniasis in turkey focks are increasing approaches to prevent and treat histomoniasis are urgently needed.